Researchers at Oxford University have discovered an as yet unknown collection of Anglo-Saxon pop sensation Kenning Lõggīn’s work.

Until now, the 7-century poet’s songs and infectious summer hits have only been known through reconstructions based on allusions to his output in 9th- and 10th-century manuscripts, and, of course, through adaptations by modern pop and rock musicians. The recent discovery promises to shed light on one of the greatest wordsmiths of the English language.

Little is known of Lōggīns’ life. It is believed that he was born sometime in the late 500s and that he rose to prominence as a poet by the early 600s, perhaps in the court of King Rædwald, who is widely believed to be the inhabitant of the lavish Sutton Hoo burial mound. Like his lord, Lōggīns appears to have had an ambivalent relationship with Christianity, which began to find acceptance in the Anglo-Saxon world during his lifetime. By the time of his death sometime after 650, however, he had made peace with his new god, for according to later accounts found in a 10th-century manuscript, he was buried in a churchyard, though the location has now been lost.

Even his name is a mystery, since his byname Lōggīns is found nowhere else in English records. While no one has been able to establish a definitive origin for the name, the consensus among scholars is that “Lōggīns” is most likely derived from the Proto-Germanic “luk-,” for “lock,” or “tangle” and may ultimately be related to the Norse god Loki, whose name shares the same origin. In Loki’s case, it may be a reference to his tendency to confuse, to “cause knots.” Lōggīns’ contemporaries, likewise, may have been playing a bit of joke on their friend, whose linguistic games and love for kennings, or opaque metaphorical representations of objects (for example, Beowulf’s “whale-road” for the “the sea”) can make for challenging reading. His songs may have gotten men and women onto the dance floor, they seem to be saying, but the words can also be very confusing.

And what words they are!

Lõggīns wrote primarily in Eddic meter, a Scandinavian form of alliterative poetry composed of lines of two stressed syllables. All vowels alliterate, and consonant clusters like “sk” and “sp” and “sh,” and “sl” must alliterate with words beginning with the same sounds. Alliteration is also only allowed in stressed syllables. Yet in a show of individuality and playfulness unusual for his time, Lōggīns appears to have taken artistic license with the refrain. Truly, he was a master of his art.

Lōggīns’ form of poetry was a rarity in Anglo-Saxon England. Where he learned it is unknown, but scholars speculate that it could be the result of previously unattested cultural exchange between Scandinavia and the English kingdoms, or perhaps it was an independent development from the poetic forms the Angles, Saxons, and Jutes brought with them over the North Sea from their homeland in what is now northern Germany and southern Denmark. It is likewise unclear exactly how many songs he composed, but we can expect more to come to light now that we have what preliminary reports have described as a “comprehensive” collection and “a find of the century.”

What follows is a side-by-side comparison of Lõggīns’ To Danger’s Hall with singer-songwriter Kenny Loggins’ Danger Zone from the 1986 film Top Gun. (The similarity between their names is, as Prof. Lawrence Dunwich-White of Oxford’s Jesus College has said, one of the greatest coincidences in history). For their parts, Kenny Loggins, producer Giorgio Moroder, and songwriter Tom Whitlock have been open about the influence the 7th-century poet had on the development of the 80s smash hit Danger Zone, and the synchronicity in themes is indeed striking. What stands out, however, is the men’s skill in their chosen traditions and the vivid images and feelings they manage to evoke.

The literary world just got a little richer today. And that, as Kenning Lōggīns would surely agree, is worthy of song.

*Words to Kenny Loggin’s Danger Zone are courtesy of Google. 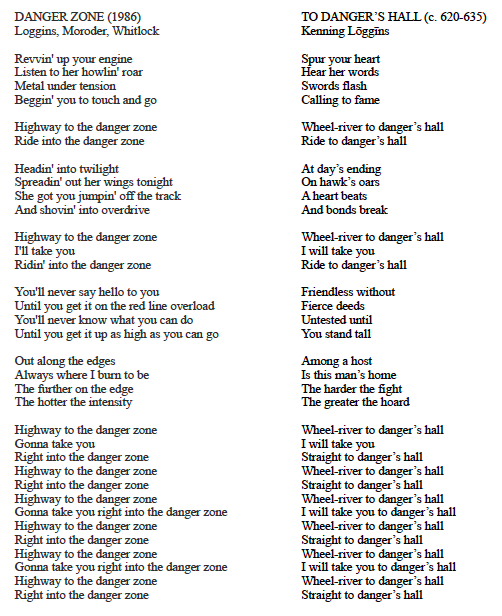